Scientists can reasonably be expected to understand the tools of their profession. In the case of cosmologists, this includes telescopes, gravity detectors, clocks and computers, among other things. While a good understanding of pure mathematics may be helpful, a thorough grasp of those parts of applied mathematics that are relevant to their discipline is essential. For cosmologists, this includes Einstein’s Theory of General Relativity.

This post has been prompted by a self-declared accidental physicist whose biography on Twitter states “Maths is now more a trap than a tool.”. That statement could be disastrous for anybody who is less than fully secure in their own numeracy.

For reasons of probity, I have suppressed the identity of the individual concerned. I refer to him as “W”.

A View of Mathematics

Mathematics is often divided into pure mathematics and applied mathematics, and this is done for very practical reasons.

Pure mathematics can be regarded as a set of axioms, a set of rules of inference, and a set of theorems that can be derived therefrom.

Applied mathematics can be regarded as the application of selected theorems so solve everyday problems, such as planning a journey or adding up the cost of all your purchases in a shop.

For the sake of transparency, I feel it important that I include this screenshot of the W’s biography: 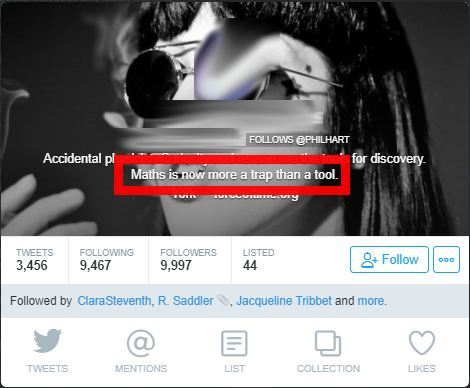 The image below captures the entire conversation between W and myself.

I have numbered the key points in that conversation, and I offer below my observations on those points.

The “If” in the image appears to be a typographical error. The words “It constrains reasoned argument” immediately reveal a lack of understanding of the rules of inference that are used in pure mathematics.

2. Both [Pure and Applied Mathematics]

3. If Maths Makes the World It Applies To …

This sets a debating position which he overturns in point 4.

The words “Maths cannot” voids the debating position that he set.

5. Left and Right? Mathematically the Same

This shows a lack of understanding of the concept of ordering in pure mathematics, which is itself built on the concept of one type of relationship between two members of a set. I then used the concept of spaces and basis vectors to frame my next question to him.

7. You Asked What My Basis for Space Was

This conflates pure and applied mathematics.

8. All Space is in Space Time

We appear to have an epistemological issue here.

While the assertion that maths is now more of a trap than a tool might hamper W’s own work, the social damage this might cause if passed on to other people cannot be ignored. Educators in particular might need to be aware that students might be exposed to this sort of thing.

The topic of professional development (PD) seems to be a vexed issue among educators. Who should have it? What PD is most relevant to the individual? Is PD even needed? If so, how and when should it be undertaken? Who should deliver that PD?

I offer the experience below not by way of answering any of these questions but in the hope that it may shed some light on the discussions surrounding them. I have suppressed the identity of the person that prompted this post, as well as avoiding their particular area of expertise, with a view to saving embarrassment. I refer to that individual as “Q”.

Q and I have known each other for years, and we routinely exchange ideas via Twitter. He had been teaching “X” for two years when the events below unfolded, and he felt that he was in command of his subject when it started. It turned out that his knowledge was both partial and faulty, though he did not know that at the time.

What started as a direct message (DM) unleashed a tsunami of learning for Q. He was puzzled by one small thing, and he sent me a DM about it. There then followed a long exchange of direct messages, including links to educational resources. It rapidly became apparent that we needed a face-to-face session, and the date, time and location were agreed.

I then prepared a PD session using a workshop approach. This included a session plan, handouts, and generating appropriate questions to ask of Q. The first task of the session was to correct Q’s misunderstandings, followed by a gap analysis, and ending with some delivery of learning. Everything was customised to Q’s context. This established a basis for what was to follow.

The face-to-face PD lasted for two hours, and Q was exhausted at the end of it. The amount of preparation time and effort needed for that session was about the same as would be needed for any session of that duration regardless of the number of participants.

The remaining PD was via direct messages, this perhaps contrasting starkly to the factory model of delivering PD to a group of people in a room.

Q then shared some of his students’ work for my comment, and it also became apparent that he was getting a firm grasp of the fundamental concepts. We then went on to the topic of grades. The grade descriptors figured very strongly here. Where Q saw a B and and B+, I saw a B and an A. Working in the industry as I do, I immediately understood the grade descriptors in both the work context and the educational context. Q did not have that advantage. The PD had moved from the phase of understanding the content to the phase of understanding how student work should be graded.

The final step of the PD was to bring in industry considerations, something that was beyond the scope of the curriculum, but that would nevertheless help to inform Q of the type of feedback that he could be giving to his students.

Q shortly afterwards expressed great gratitude for what I had helped him to learn.

The above may point to some perhaps intractable problems. If Q had been asked if he needed PD before all these events happened his answer would almost certainly would have been “no”. Even if he had said “yes”, how would decision makers made the necessary PD available to him? Where would they find the funding, the training provider, and the political will? Regardless of the answers to those questions, I think it is worthwhile pointing out that Q sought out his own PD, and this has benefited both himself and all his existing and future students.